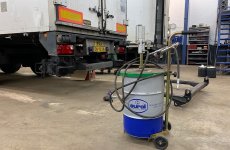 Under the name Specialty Lubricants, Eurol supplies special lubricants that help reduce costs and boost efficiency. Syngis Technology ensures that their lubricating and protective properties enhance one another under extreme conditions. We visited Müller Fresh Food Logistics to see how well this works in practice.

'It happens somewhere in the Netherlands every year', tells Anton Müller. The managing Director of European Truck & Trailer Care and Technical Director of Müller Fresh Food Logistics provides some examples. ‘The driver is unloading at a distribution centre or shopping centre, and the tail lift gets stuck. Or the platform drops suddenly, and the products tumble onto the ground. Or worse still, people fall off.’ This is why he swears by frequent, high-quality lubrication, whether they are his own trucks or those of third parties. ‘We do all we can to keep the equipment in good condition. Consider it from the financial perspective. There are 33 pallets or 56 cage carts on a trailer. That means several hundred movements with the tail lift per day. If you use high quality grease to create a longer, trouble-free period, and you can also use a smaller amount, that extra euro in the purchase price no longer matters. Your overall maintenance costs are lower.’

Maintenance costs
Müller Fresh Food Logistics has been using Eurol Specialty Lubricants with Syngis Technology for the lubrication of bearings, pin/bush connections, chains, spindles, PTO shafts, and open gears for several years now. This line of lubricants was developed by Eurol in-house. The lubricating and protective properties are mutually reinforcing, particularly under extreme and highly variable conditions, such as pressure loads, long-lasting loads, and high temperature and humidity. The technology combines the latest additives with synthetic base oils and thickeners. Moreover, in contrast to the discontinued Teflon grease, it contains no microplastics.

For Eurol, the Dakar Rally with its demanding conditions – sand, freshwater and seawater, extreme heat – is the perfect test environment. In the 2019 edition, last January, concept products were once again tested by the Eurol Dakar teams. ‘As a businessman and a fan, I’m thrilled by Eurol’s participation,’ says Anton Müller. ‘In a rally like that, your equipment is subjected to the toughest possible conditions. The transformation into something suitable for everyday use results in a tough final product. There’s grease and there’s grease. You can inject and lubricate with all kinds of products that look good, but if a product begins to lose its protective effect after a few weeks because it fails to adhere adequately and you ultimately get metal on metal, it’s worse than worthless. It’s more cosmetic than anything else. Customers who come to us for service are willing to pay for half-yearly maintenance, but then they want to be sure it’s done properly.’

Thickener
Time to move from words to deeds. Rein van der Naalt (Key Account Manager at Eurol) conjures up three jars of grease from his demo case. He carefully applies a small amount of each to a piece of paper. The first two substances are lithium complex and molybdenum, which are found in many transport workshops. After just a few minutes the oil rises out of the grease and forms a clearly visible ring. ‘Grease consists of a thickener to which oil is added,’ explains van der Naalt. ‘But in this chemical composition, the oil runs off, causing dirt and sand to adhere. The thing gets dirty. But that doesn’t happen with the Eurol Specialty grease, in which the thickener is also the lubricant.’ Even after contact with sand, it retains its lubricating effect, as shown by the dry state of the third test paper.

A short time later he shows test photos of putty knives that have been coated with the three types of grease in the Eurol lab. After seven days of salt spray treatment, extreme corrosion occurs on the knife with lithium complex. The same occurs after application of molybdenum grease. The putty knives with Eurol Specialty lubricating grease do not corrode at all; they remain completely untarnished. As Rein explains, ‘applied to tail lifts, that’s the difference between whether or not you have six months of trouble-free operation. Think what it costs when someone has to make a special trip to the workshop for repair of a tail lift that won’t close or is stuck at an angle.’ ‘Or the savings achieved by a valve which, thanks to proper, regular maintenance, lasts twelve years rather than eight,’ adds Anton Müller.

It’s also nice that, unlike other products, the grease doesn’t have to be applied in large blobs. Otherwise there’s a good chance some of it will slide off in the first sharp bend, which is bad news from the environmental perspective. ‘People think “the greasier the better,” but that’s a misconception.’

Mobile crane
All in all, the conclusion seems simple: the transport operator who doesn’t keep up with new lubrication technology is short-changing his end customer, and therefore himself. In truth, however, the problem is more deep-rooted, says Bart Boerboom, Sales Manager Netherlands at Eurol.

‘A contact of ours once said that the transport industry has traditionally devoted little time and attention to maintenance behind the rear axle. That’s often the result of a lack of awareness in the workshop about the improved lubricants that are available today. That’s a shame when you realize how much a tail lift or mobile crane has to endure in the field, yet we expect them to work straight away, the moment you need them.’

In his view, this can only be achieved in one way: timely maintenance, with the right products and the right application. That is the only way to extend the service life and increase operational reliability. Boerboom has Anton Müller on his side. ‘I’m not primarily a price buyer. You can buy grease anywhere, but not good grease that adds value.’