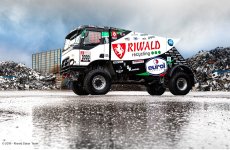 The Riwald Dakar Team and Czech partner MKR Technology, have been working hard for months on the development of an entirely new and unique concept; a hybrid off-road truck. The project is supported by partners – ZF Friedrichshafen – Renault Trucks – Hendrickson – AxleTech – Eurol.

This is the time for the right choice

At a time when the environment has become a major global issue, the focus in developing the truck has been on hybrid technology. The Renault Trucks C460 Hybrid Edition is a lightweight truck which, including the 700 kilos of hybrid technology, has reached the ideal weight of 8.5 tonnes.

This circular vision is set by A.S.O, the organisation of the toughest rally in the world; the Dakar Rally, and is followed with enthusiasm. They would like to see the Riwald Dakar Team with Gert Huzink behind the wheel of the new Renault Trucks C460 Hybrid Edition at the start of Dakar 2020.

Riwald Recycling, currently celebrating their anniversary, invests in the future and are one of the most innovative recycling companies in Europe. More sustainable, cleaner and professional, they recycle all conceivable metals with the aim of; 100% reuse of recycling materials released in this modern economy.

As the main sponsor of the Riwald Dakar Team, the Dutch company is at the cradle of this spectacular and structural change in rally sport. An unleashed reinforcement towards a better environment and an even better world, a philosophy that Riwald Recycling itself considers to be a high priority.

With Eurol to top performance

In order to achieve optimal performance, Riwald applies various Eurol products in the new hybrid rally truck. An example of this is Eurol Geo-Max 10W-40, a fully synthetic engine oil for modern trucks with drastically reduced concentrations of sulphur, phosphorus and sulphate ash to protect the exhaust aftertreatment systems. Eurol Additive-S Engine is used to give this engine oil extra performance, while at the same time protecting it from wear and tear. This additive can be added to heavily loaded diesel engines, such as those in the Dakar rally truck.

For optimum lubrication of the hybrid drive, Riwald uses the Eurol BIO Grease SI-000/101-S from the Eurol Specialty line. This grease is resistant to heavy impact loads and provides excellent anti-corrosion and unique anti-wear protection. To protect the suspension and springs under extreme Dakar conditions, Eurol Grease CS-2/502-S is used. Riwald also uses Eurol Grease CS-2/103-S to protect the wheel bearings and crossings in extreme situations.